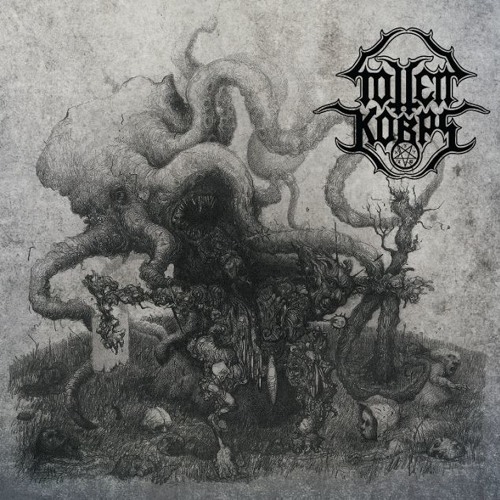 I was really excited when I heard Totten Korps had something new coming out it had been over ten years since Tharnheim: Athi-Land-Nhi; Ciclopean Crypts of Citadels (2001) and with a few personnel changes since then I had to check this new material out,if your not familiar with this band they play death metal.

From the get go we have Supreme Commanders of Darkness the title track this comes in with no intro just straight in your face and it gave me a feeling of old Morbid Angel to a certain point,the new vocalist SadaX comes off very well with a killer tone to his voice that should please anybody into death metal,but I must say this track didn’t really do much for me as it slowed down near the end and left me kind of wondering how the rest of this would be.The Black Flame of the Underworld hell yeah! now where talking this what I like a pure smoking track even with it’s breaks this one should catch anybodies ears,this should of been the opener.El antiguo maestro de las pestilencias (The old master of pestilence) this is the only track on here that is in spanish and it’s a very interesting one because it starts out with this crunchy riff with a slight solo thrown in then the vocals come just as it burst into a pounding of the brain,it has some more interesting parts that kept my mind hooked,Hastur’s Voice Echoes in Our Minds and I Dwell in the Mind of the Gullible the first one starts out really fast but then midway through it slows down and shows a part of the band not heard yet but it’s really good reminds me of some other band I can’t think of at the moment but this gets heavy at the end a well written composition,the other one has this catchy riff but what really caught my ear on this one was the drumming it really stands out here especially halfway through it went off really good then concludes without a hitch,so we’re half way through then The Journey through Styx on the Arms of Hades nothing new on here but the guitar leads really standout here,not as driving as the previous but a good listen.Amarduk and The Legacy of Leviathan (Shadows from the Depths) here I came at a standstill as the first one didn’t really do anything for me but that’s just me, others might like it,the next one makes up for it as gets back into the mold of things but Nailing nailed me this is my favorite track on here all the elements on here are perfect it grabbed me on the first listen,it just has that punch some tracks have.Tortured Souls from the Paths of Perdition the closer,you would think that after the previous track they would have something to blow me away at the end but sadly this doesn’t come near that,it has a few blast beats here and there but it just wasn’t what I was expecting.

By the way the production here is excellent! and this release was worth the long wait,yeah it has it’s flaws,like the tracking list could of been better but in the digital world we can easily skip things,I would recommend this if you like old school death metal,the vocals really made this stand out,their really good,this release is worth checking out.