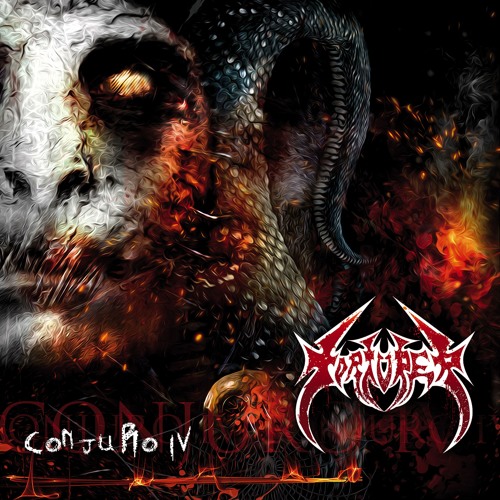 It has been awhile since we heard from Torturer and their brand of death thrash, so I knew they were working on a new one and at the time of writing it hasn’t been released in physical format yet and the only mention I seen is their headlining the Satan’s Gift II fest which is in late June and that is supposed to be their releasing party so who knows.

But let’s get to this new one with the opener Conjuro IV which has an interesting intro as some female that sounds possessed yells out before the track comes in and right there you can hear that sound the band has been using for the last few releases with those pounding beats but this is very interesting because of the many breaks we get fast and slow parts and that is a common thing in the band’s sound these days,Bestial Invocation, is bit more on the edgier side in the beginning but then it goes more into a deep darker path which is one of the best things this band is good at some killer bass going off on here as well and then it rides out again,one of my favs so far.

One thing I will mention is the band has titles in english but they sing them in spanish they did this on the last album as well,kind of strange but different.Twisting is one that I had to hear a few times before it sank in and it’s one of those tracks that starts out really hard but then goes off into this really pounding riff that keeps you guessing what’s next and it’s very catchy as well and the drumming on here is excellent as it brings out the best on this one.Fucking Bastard,I would of thought this would of been a brutal fast paced one but it’s very slow pounding in the beginning until the end it gets faster and some killer lead that made this one worth while,Perception of Life is one of the stronger numbers on here as this will catch you once you hear it as it’s a driver all the way through some really great playing on here with the dueling guitar sound that never disappoints,one of the best on here.

Ralco,this track was on the Rise from the Ashes album but on here it is sung in spanish and it’s just as good as the first time as the production is better this time around,Victim,the opening riff reminded me of old Criminal and that feeling is felt through the whole thing,this rips as well and you will notice the sound as it’s almost right like it.Exterminio Total, with it’s pounding drum beat to start and all out assault and a great closer as this is the strongest track when it comes to death thrash,excellent release.

One thing about Torturer is they have stuck to their guns all these years they might not be for everybody as they don’t go all out on their music they have this certain sound they throw some rhythm sometimes,it’s something you have to hear to appreciate I noticed this on their last album and it crossed over to this one which is fine by me.

CD Baby has the digital release of this and it’s on YouTube as well,which really surprises me.

A couple of tracks off this.