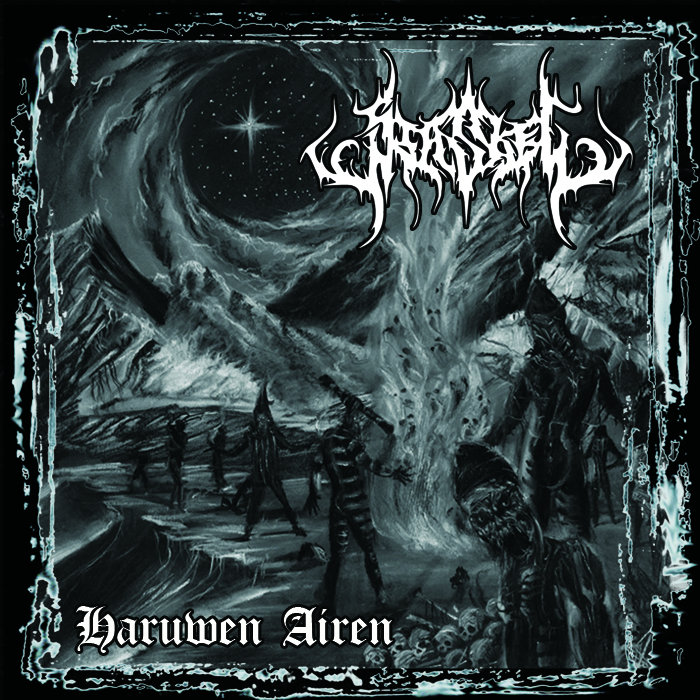 Siaskel bring a new twist as their music is based on mythology and cosmogony of Selk’nam culture and all the titles are in the language,so don’t let that make a difference this is their second full length,7 tracks of pure black death metal.

From the start of Hechuknhaiyin Yecna Shuaken Chima you can hear how powerful the band is and the vocals of Gorrge are perfect as this crushes right from the start,so be prepared to get hammered,this band has come to kill!Só’ón Hás-Kan,is up next and it even gets heavier as the previous,one thing about this band you will notice is the tracks are very different on how they were composed but they all have that certain punch that really caught my ear.Haruwen Airen is another one that keeps bashing at your brain with no let down,one thing I will mention is the guitar playing of Ma’hai Jippen, this lady can rip she does an excellent job on here.Hais and Hain,on the first one the pace kind of slows down for the first time on the album but it gets heavy as the drums come in sounding like a machine gun going off, on the second we have the same thing but the vocals really carry this one with the sick screams and a minor break to bring this down back to earth,not bad but different than the rest as this is the longest track on here that gets really strong at the end. Mai-ich has this really black metal feel to it from the opening riff and the lead at end really kills as right after the song went insane.Han K’win Saik the closer leaves off as the whole album has done all the way through with the band playing like maniacs,a great album.

This is one of the best albums I’ve heard this year so far,if you like extreme metal this will fill your need as it did mine everything on here sounds perfect,I highly recommend it.

*The Portuguese label Signal Rex will be releasing this as a digi pak (only 100 copies) in November,you can pre order it here.