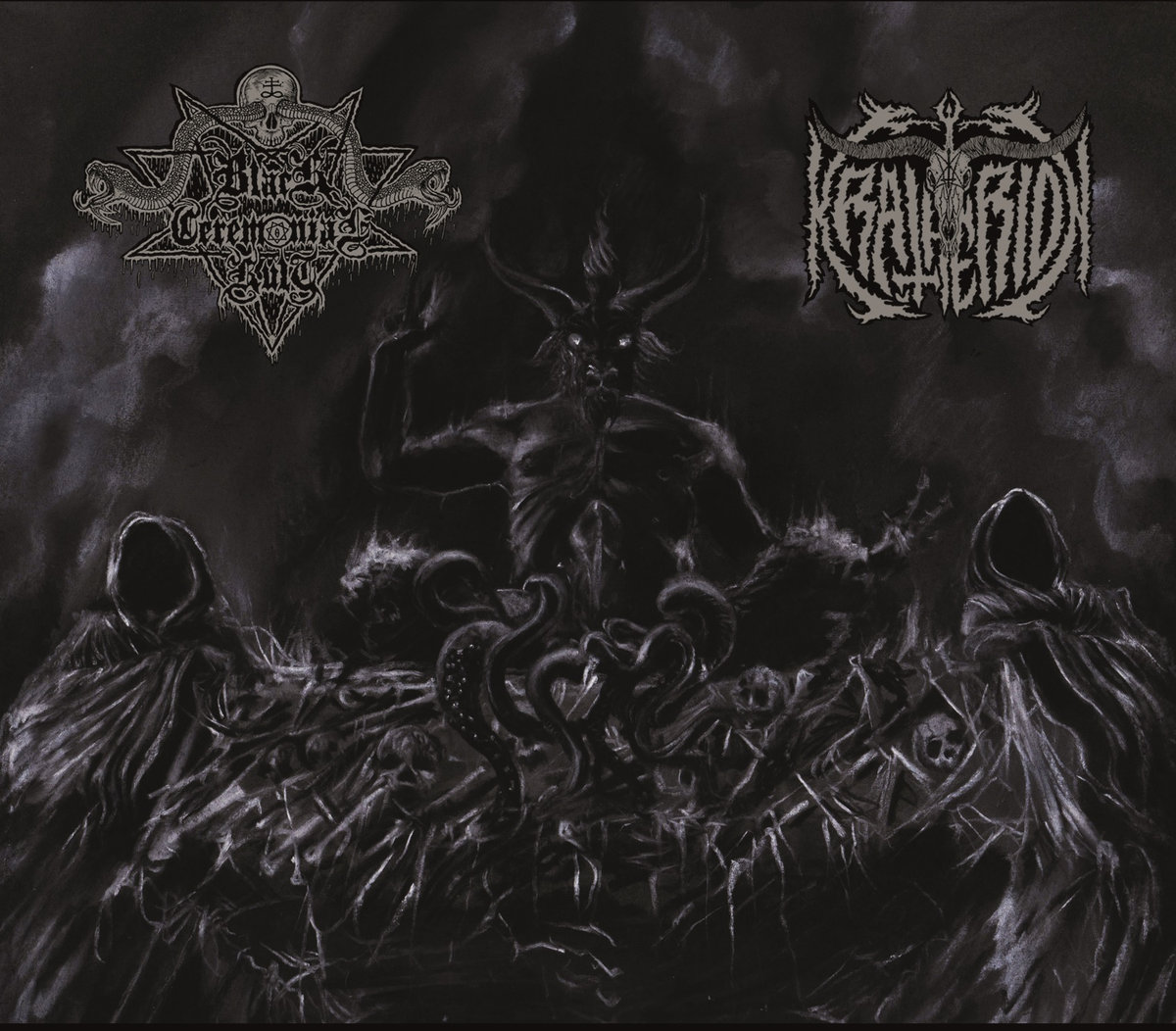 Black Ceremonial Kult is one evil sounding band and this must be a concept,because all the titles except the first one start with Liber and run I through V,but to the music,this is some sick stuff that really should please ones that are into the dark side of things.Intro: The Mysteries of the Snake is just some very evil sounding intro that set the scene and it sounds like this is coming straight from hell.Liber I: Har-pa-jered liber,opens up and you hear the vocals of Khaos (Bass, Vocals) and they sound like hell on earth,the track itself has two parts with a break,the first part being slow but then it breaks into this all out hell,that pounds into your skull,a really powerful track to get things started,Liber II: Hexagram,starts out in a fast pace before slowing down a bit then you hear a bassline but then gets back into spewing evil as it has the creepy riff but then again it goes all out into pure hell as the band just goes off.Liber III: Yhvh eloah ve daath,up to this point this track is an all assault on your brain this sounds like your in hell with these vocals that sound like some demon is pulling you down to the pits,the band absolutely just goes insane,a brief break thrown in and the ending is just pure insanity,the best track up till now.Liber IV: Rising Sun ,things slow down a bit on here but as usual at the end there is a break and that leads to a crushing end.Liber V: Victory I II III,the closer of this trip through hell,on here this track got me confused as there are parts that just didn’t click as much as the others but it’s ok,probably the weakest track on here.

I will say that this band isn’t for those who want to hear vocals,as what you get here is some pure evil that blends in very well and distinguish the band from others,not a bad outing for this outfit.

Kratherion sings in Spanish and have a few releases up to this point,an intro starts this off that’s kinda long but then Galopando entre Ruinas Celestiales (Galloping between Celestial Ruins) comes in,I will say this the band is labeled black metal but from this first track this sounds more on the death/black side and this opener has a few tempo changes in it that kept me interested even some lead appears on here,it all fits in well for a starter. Manifiesto del apostolado caótico (Manifesto chaotic apostolate),this one comes out right at you full blast from the start as you can hear the whole band going off on here as well as the vocals are really excellent when it comes to the lyrical content and just the way it’s written really caught my ear that should please anybody into this extreme kind of metal.Escaras de santidad (Bedsores of holiness),the pace kind of slows down here but it picks up but this track is something you have to hear to really understand what’s going on here as both Vilú and Negro share the vocals for an interesting mix and the guitar playing on here as well stood out and this one just has this certain feel about it as you hear these demonic growls towards the end and the feedback as well good evil shit! Las torres del silencio (Towers of Silence),the opening riff reminded me of some old Swedish death metal but that’s about it as the tempo here as is kinda slow compared to the other tracks on here and is probably the weakest track on here,it does speed up a bit at the end but it kind of just took away the feeling that the rest had given me until that point.Vomitoxicatarsis,the closer on here gets us back on track and hell is this a catchy tune of pure aggression as it builds up as it goes on and just crushes your ass,but it left me wanting to hear more as it ends quick,there is an outro at the end of some female getting it somewhere in hell.

Both the bands have their own taste,and I would recommend this split to anybody that’s into underground black/death metal,I had to hear it a few times to get the feel of it and I was very pleased in the end.

You can hear the whole split on here.